This past weekend, while clearing out the attic space above the garage, I found a tool box containing the "remote camera sound trigger" circuit that I used to photograph Space Shuttle launches from unmanned cameras as close as 500 yards to the launch pad. I contacted the Museum of Flight about adding this to last week's donation. 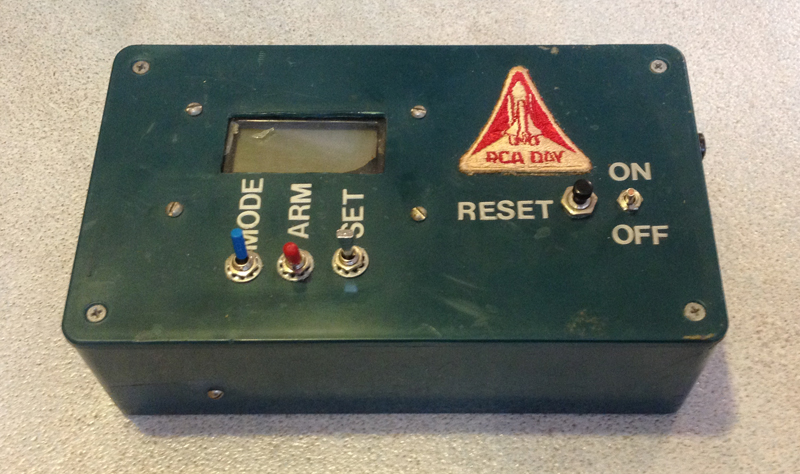 This box was connected to a microphone, the roar of the rockets would close the circuit, and the cameras would fire. Since the cameras all had autowinders, they would fire until the 36 frames of film (this was analog photography) were exhausted. 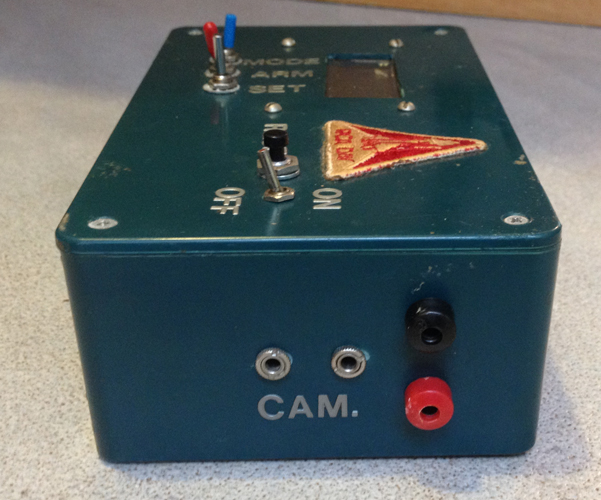 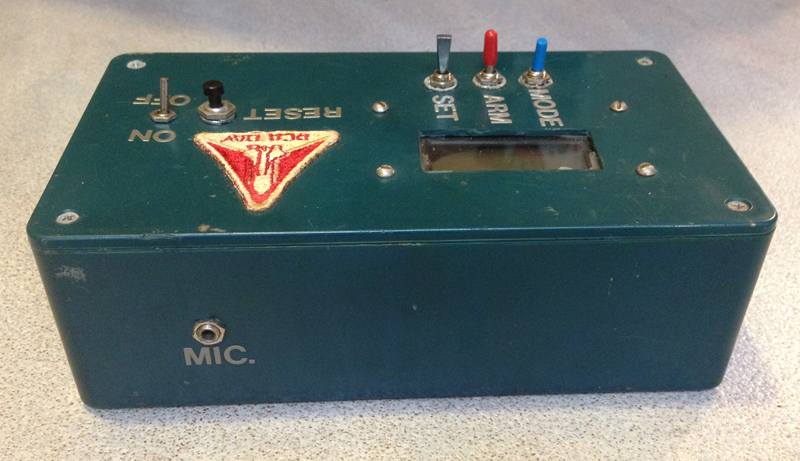 After the Challenger disintegration, NASA confiscated all of the film from photographers' remote cameras in the hope that they might find a clue that was not captured on NASA's many cameras. One frame from a remote camera set up by photographer Scott "Sting Ray" Andrews on the north side of the pad—we photographers mostly preferred the "beauty shot" angles that highlighted the orbiter—caught a puff of smoke where one should NEVER be seen... emitting from one of the joints of the west-side solid rocket booster (SRB).

Scott's photograph led investigators directly to the cause of the flame that burned a hole through the wall of the external tank (ET), causing it to explode. The forces from this explosion are what tore the Challenger orbiter apart.

If you would like to read the report published by The Miami Herald on November 13, 1988 after an exhaustive investigation, click here to go to a web site where it is reprinted. If that link is broken, try here.

WARNING: It is very graphic and you will get angry and/or upset when you read it.

An original copy of the Tropic magazine in which the article debuted was included in last week's donation to the Museum of Flight—more as information I thought they should have, not as something I think should be exhibited.

Could This be My Legacy?

As some of you know, one of my previous careers was as a freelance commercial photographer. I'm also a huge fan and follower of the U.S. and Soviet space efforts since Al Shepard's 1962 sub-orbital flight. In November 1982, I got the chance to combine the two when, through the help the editor of a small southwestern Ohio newspaper (a friend of my mom's husband), I secure press credentials for the launch of the second space shuttle mission—STS-2.
That experience opened a new door to me, behind which waited adventures I could not imagine...

Over the next seven years, I got to photograph 25 more Space Shuttle launches and/or the event surrounding them. I even obtained a hard-to-get permanent NASA Press badge that allowed me access between missions.  Always a freelancer meant always paying my own expense. The upside of that was that the arrangement I worked out with Satellite Communications, the magazine that authorized me to shoot on their behalf allowed me to retain the copyright on all of my images while giving them first-time publication rights to whatever they wanted from the most recent mission.
What many people fail to think about is that there is so much more to a Space Shuttle mission than the actual launch... and I got to see more than most!

The lightning photo is the best image from three hours and two rolls of carefully-timed exposures during a heavy thunderstorm. I was thankful for my fiberglass-shaft golf umbrella <smile>. A large framed print of it was hanging on the wall of the Press Dome (the hub of the KSC Press Site) when Robert Schulman, the NASA Fine Art Curator, stopped by in late 1984. When he saw it, he told NASA Director of Public Affairs Ed Harrison that he wanted that photographer to be the first ever in the NASA Fine Art Program.

Of course, I accepted immediately and in December 1985, I became the first photographer ever to take part in the NASA Art Program.
One of the places I'd always wanted to see was inside the VAB... but it was off-limits to the press (for safety reasons, they said) except for special occasions. As part of the Art Team's access, we were welcomed into the VAB and spent a number of hours drawing (everyone else) and photographing (me and a couple of the others). When we were in the VAB they were "stacking" (assembling) the orbiter and booster rockets for the next Space Shuttle mission—STS-51L and the first non-astronaut civilian, teacher Christa McAuliffe (though she did go through rigorous training) to head for space. As you know, that was the final mission of the orbiter Challenger and its crew of seven.
Participation in the NASA Fine Art Program was a great honor and the highlight of my NASA experience. The three photos that NASA requested for the archives were the lightning shot above and these two:

After eight years and over 25 missions, I had thousands of slides, negatives, and prints of the Shuttle program and related activities in notebooks and boxes sitting in a closet. Seven closets, actually, in five cities in three states—one in each of the residences I occupied during the 25 years since the last mission I shot, STS-28 (1989). I am very lucky that, somehow, all that got misplaced in that time/space were the first 20 or so mission press passes.

For my birthday two years ago, my friend Liz took me to the Museum of Flight south of Seattle for the opening weekend of the new exhibit—the Space Shuttle Trainer. I've been a member of the MoF for many years and was disappointed when they did not get one of the orbiters for their amazing collection. As Liz and I entered the building housing the Trainer, I immediately realized that the Museum of Flight had scored the greatest prize of all!

The Trainer is the actual Orbiter mock-up that the Space Shuttle astronauts used to train for their missions. During the tours, visitors to the MoF can slide in through the crew hatch to the downstairs crew quarters (just like the astronauts did) and even climb the internal ladder to the flight deck!!! Visitors to the museums housing the Space Shuttles Enterprise (the only non-space flying orbiter), Discovery, Atlantis, and Endeavor, can only view them from the outside—no touching allowed and there is certainly no way in hell you're getting inside.

During the Shuttle Trainer visit, I got thinking about my photographs and, although it took almost two years, I finally made the call asking if the Museum of Flight would be interested in my collection. Collections Registrar Christine Runte told me that they were definitely interested in meeting me and seeing what I had.

This past Thursday, October 9th, I took my collection to the Museum and met with Christine, Amy Heidrick (Supervisory Achivist), Lindsay Zaborowski (Archivist), and Allison Loveland (Museum Collections Specialist). They were very welcoming and grateful for my offer to donate. Outside of the public domain NASA photos, there are very few professional-quality photos of the Shuttle program available. They told me a couple times that my collection will give them a big boost.

I spent almost 90 minutes reviewing the collection with them, both explaining some of the non-photographic items, and telling stories and anecdotes of my time covering the Space Shuttle program. Fortunately for them, I only told 5% or so of the total. Maybe I'll tell (most of) the rest in a book some day.

Bottom line, they loved my photos and will be adding them to their archives upon approval of the Board of Directors.

The title of this post is "Could This be My Legacy?" because on my drive home from the meeting it occurred to me that now I may actually have one. Those of us with a social conscience would like to leave the planet a better place for us having been here. Some do it through raising good children, some through good works, some by saving lives or creating new ways of thinking or doing, and others by creating things that will live beyond them.

In donating my photographs to the Museum of Flight, I hope that I have created something that will live for many decades beyond my time. I am very fortunate to have a bit of artistic ability and that I had the chance to use it in a rather unique circumstance—documenting a portion of man's quest to bring a little more of the unknown into the known.

Prior to last Thursday, the collection could have perished at any time through accident (e.g. fire or flood) or intention (discarded as untouched for over two decades; tossed into the trash {had I died} by someone assigned to clear the house). They are now safe and, I hope, will be used by this and future generations in their search for an understanding of what their predecessors thought and did.

As I re-read the words of the previous paragraph, they feel a bit presumptuous... and maybe they are. I am simply ecstatic to know that the photographs will still be here, well taken care of, long after I am finally, myself, off the planet.

If you've read this far, please ask yourself what you have that could benefit others after you are gone. Although your first thought may be about money, that is not what I'm asking. Were you witness to tough or amazing or historical times? Do you have family heirlooms whose history/origins are unknown to the younger generations? Do you have a skill that is unique or uncommon—other than belching the alphabet? Are you of a disappearing generation? If so, you have stories, experiences, and/or skills that others want to hear, learn, and cherish! They will vanish with your last breath unless you share them NOW with future generations. It's very easy to save them using a tape recorder (a video camera would be even better) or its digital equivalent.

We humans are a race of story tellers who no longer tell enough stories. Please save yours.