A few months before I returned to Việt Nam, I read an on-line article that talked about and showed examples of how Time magazine frequently has a different cover and cover story in the United States than it does in the rest of the world. In nearly every case, the U.S. cover was fluffy and shallow while the cover for the rest of the world was newsworthy.

I normally shun Time because, like 90% of the rest of American media, it leans far right (as in -wing, as opposed to correct) and I refuse to support such publications.

Last week I bought the 16 June 2014 international issue of Time. In checking the Time web site I was unable to find the US cover, so I do not know whether or not it is different this week. In any case, I have to show you, my readers, how low these bastards have fallen: 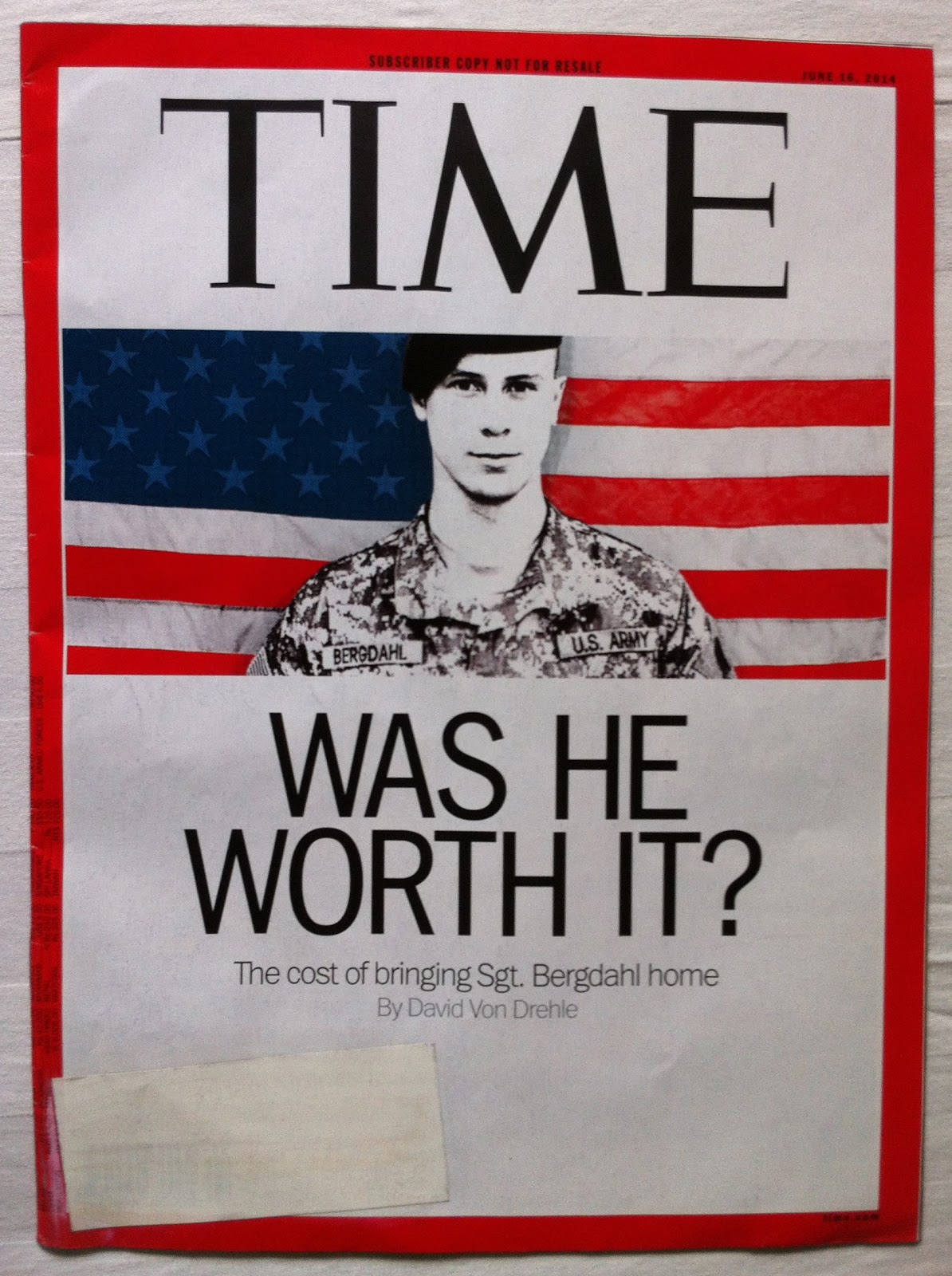 Think about the message this cover sends to the world; the very terrorists that the wingnut far-right über-conservative clowns pee their pants about daily; and, most importantly, the Americans who are on the front line and who daily risk becoming the next hostage.

It doesn't matter what the article inside actually says or concludes; this cover is the main stream American media telling every single member of the U.S. armed forces that the "leave no man behind" credo that has been a cornerstone of the U.S. military for over 200 years may or may not apply to you depending on if we approve of what you are alleged to have done prior to or during your captivity.

Nothing Sgt. Bergdahl could do or not do while wearing the uniform makes him unworthy to bring home. NOTHING!

The chicken-hawks (those who never served a day in the military and have never seen a war they didn't want others to fight) led the cheers for the illegal, immoral, and unnecessary military involvements in Iraq and Afghanistan. Now they have their panties in a wad about the possibility that in Sgt. Bergdahl's five-year nightmarish attempt to stay alive, he may have done something of which they disapprove. He may have done something for which he should now be held accountable... and he may have done what he needed to survive an unimaginably horrific five years held by people who cut off captives' heads live on the Internet. We will not know until it gets sorted out. If it ever gets sorted out. Were Sgt. Bergdahl not returned to the U.S., he would never get the chance to defend his actions—if they even need defending.

What happened to "innocent until proven guilty"?

The chicken-hawks also cast dispersions on his father because, in solidarity with his son's captivity, the elder Bergdahl grew a long bushy beard that the chicken-hawks say may mean that he's also a terrorist.

Yes, they are that ridiculous/pathetic.

Whatever Sgt. Bergdahl may or may not have done, he deserves repatriation. The military justice system will later determine if he committed any offenses.

To even raise the question as to whether or not Sgt. Bergdahl was "worth it", undermines the moral of every person wearing the uniform of the U.S. military and the moral of the American people.

YES, HE WAS WORTH IT!

If and when another U.S. soldier, sailor, or Marine is taken prisoner, let's see if the captors will take war criminals Bush, Cheney, Rumsfeld, Rice,Wolfowitz,  Yee, et al in exchange. Or maybe chicken-hawks Rush, Hannity, Colmes, O'Reilly, Scarborough, Will, Graham, and Kristol. Then we'll see what those assholes think about repatriation.

I'll even pay for their transportation one-way to the sand...