I will live in Đà Lạt

Picture the Pacific Northwest (US) with coffee plantations, narrow two lane roads, 99 motor scooters for every four-wheeled vehicle, and dogs on the menu.
I guess cats are safe. For now...

One of the things I learned very early in my travels to experience other cultures is to refrain from judging by my or Western standards. That said, I'm sticking with the more conventional foods... like Hù tiếu mì thập cẩm (Assorted pig's innards with rice noodles or egg noodles).
While in HCMC, I met with Eoin (pronounced Owen--I had to ask) Bassett of www.internationalliving.com. He's the Editor, and was in-town as part of his whirlwind tour of SE Asia. Headquartered in Ireland, they (internationalliving.com) send out free daily emails that offer hints and tips for those who are considering the ex-pat life. Their market is America, though they do have subscribers elsewhere.

Just before I left on this trip I read a note in one of the emails that Eoin would be in Việt Nam at the same time as I, so I sent him an email asking if he'd like to meet in HCMC. We met my second Monday in-country, just after he left Đà Lạt. We talked for a bit and he asked me to write a few first-person and informational articles for the magazine that IL puts out every month, both on-line and hard copy, for its paid subscribers. I agreed, of course!

Eoin also told me about his experience in Đà Lạt, gave me the name and contact information of a young woman who had volunteered to act as a guide for his writers, and suggested a hotel. In return, I told him to disregard the signs above SGN airport security (international terminal) directing passengers to security screening based on their gate number because all gates are accessible from both screening areas. He later emailed me that this tip saved him a lot of time.
Upon arrival in Đà Lạt, I took a taxi into town. Before getting in the taxi, I asked how much and he said "Ba." Three, as in 300,000 (US$15). I got in. The drive was about 30 minutes and when we arrived at the hotel, the meter said 527,000. I gave him the agreed-upon 300k and he was happy... though not as happy as I was that I'd asked the price up-front! My happiness was somewhat dampened when I saw taxis with "Airport 220,000" on them. It's only $4 less, so I didn't lose any sleep.
The Villa Pink House is great! It's a family-run operation and son Ron checked me in. He told me about the hotel, the surroundings, the free breakfast every morning (note: "Banana Bread" here is two bananas and a small baguette, not what every Westerner expects when we see those two words together), and Mr. Rot's Secret Tour. He also secured my extra cash in the safe and carried my bag up to my room.
The rest of Day One in Đà Lạt was spent wandering on-foot through the city of roughly 210,000. By comparison, Ho Chi Minh City has 7.4 million people--what a difference a divisor of 37 makes!!!

I also met with Eoin's (and now my) friend Vy (pronounced Vee) over tea and she asked how she might make my trip to Đà Lạt better. Vy is a student who was studying and taking her university entrance exams while I was there and still found time to meet twice with me AND work at her part-time job at a Reflexology business. We decided that the most value for me would be if she found two or three quiet neighborhoods to show me so that I could get a feel for Đà Lạt and whether it offered what I'm looking for in a home--some of which, of course, are intangibles.

After Vy went home to study, I walked around a bit more, stopping for lunch at one of the dozens of small, family-run restaurants that line most of the streets in the city center... and it was good. What did I have? No idea. I just point to something on the menu and they bring it.

I rented a moto from the hotel and stuck out again across the city, this time in search of the acupuncture doctor recommended by Vy's reflexology employer. Late the previous afternoon I had a reflexology treatment and the practitioner suggested that I try acupuncture for my neck pain. For the past few weeks I've been going to an ex-pat chiropractor in HCMC, but on my last visit he popped one of my ribs OUT of place. I am NOT going back to the American Chiropractic in Ho Chi Minh City.

The Pink House has a very good map that they give to all guests, but like all maps, it is limited. As I learned during my first trip here, the map apps for iPhone and iPad are worthless in Việt Nam... and until now--a week later--I did not think to take my new Garmin Zumo GPS. If I had taken it, I would have missed the 35-minute adventure that comes with realizing you are headed the wrong way; asking directions by showing a small piece of paper with the doctor's name and address; following the pointed finger/arm; realizing again you are headed the wrong way; asking additional directions and following them; realizing that AGAIN you are going the wrong way; searching for someone to ask for help because you're out in the lightly-populated area; discovering that the address for which you search is one of five identical soulless apartment buildings surrounded by concrete AND that the security guard has never heard of the doctor; asking a fifth time (yes, if you're counting I left one out above :-P) and having the woman walk away quickly as you start to talk; and, finally, finding the woman who nodded yes and climbed on the back of my motorbike (sans helmet) to direct me to the correct house/clinic only 50 meters away around the corner and a 15-minute motorbike ride from the hotel.

The doctor was very nice, a great practitioner, and someone with whom I am sure I will continue my two-a-day visits soon after my return to Đà Lạt. As you probably surmised a bit back, the answer to the "what involves..." question is acupuncture.

On the way to the doctor, I passed a still-smoking, huge French-style structure that I at first thought was a church-related building. As it turned out, it was a Vietnamese army map storage facility that had burned overnight. I was unable to find an English-language newspaper during my visit--probably because my two favorite newspaper saleswomen, Sài Gòn-based sisters Lan and Ca, were not there to find me and sell me my daily paper. 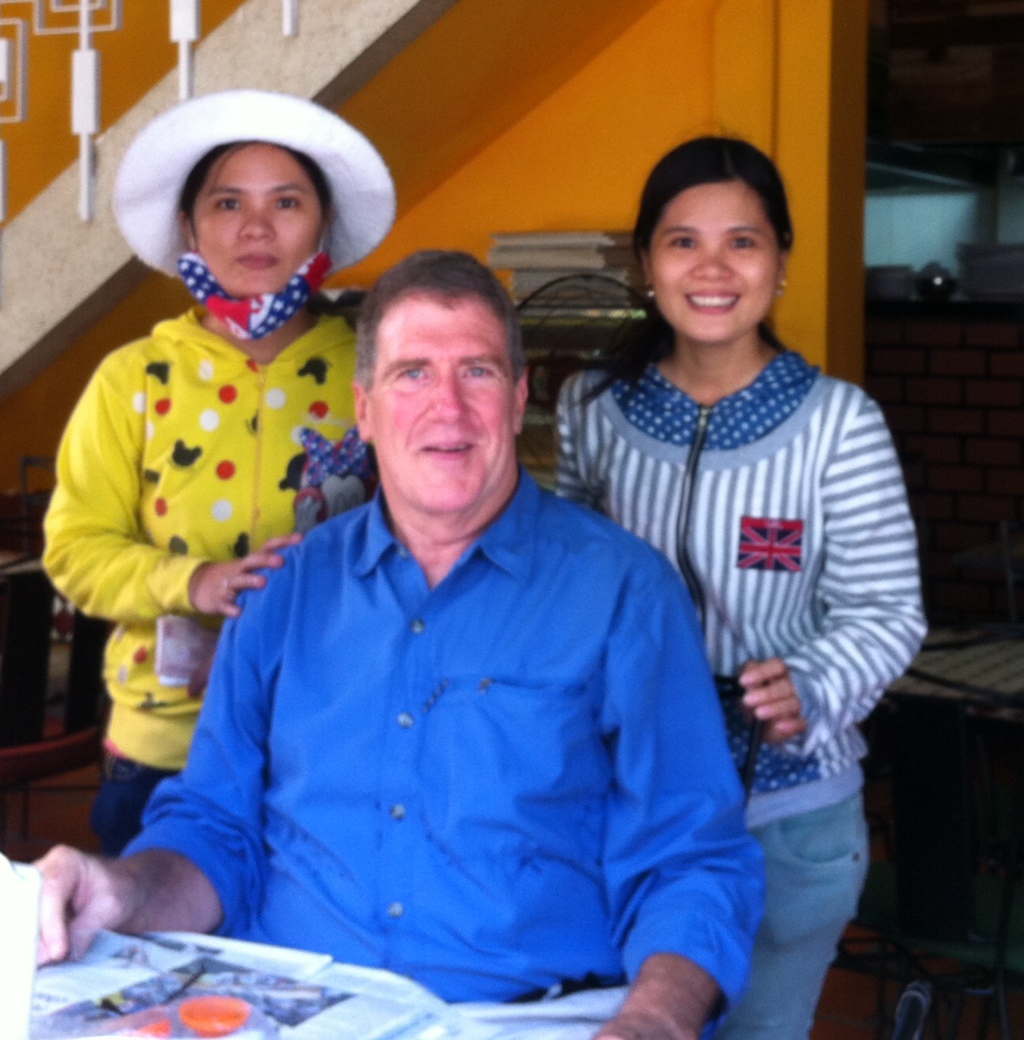 The structure itself appeared intact, though the roof on the northern half of the building was completely gone. Police and firefighters were still on-scene and it was interesting to note their uniforms and protective gear. As with any departure from what passes for normal, there were also plenty of onlookers and moto riders willing to stop in the middle of the street to gawk at the partial destruction of an interesting piece of architecture. Notice the smoke... 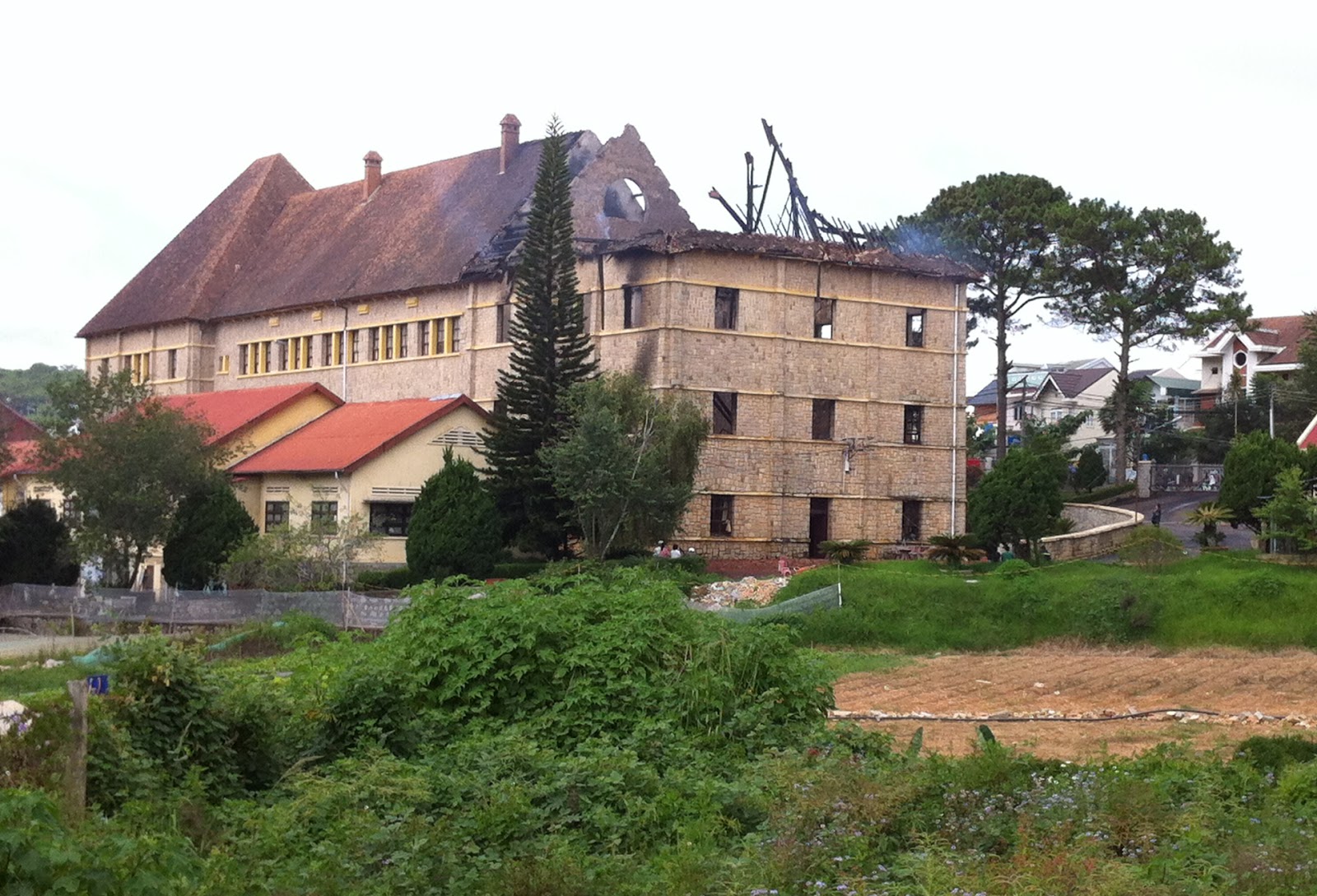 Between my first and second acupuncture visits, I headed out to find a seamstress. At the suggestion of a couple locals, I headed over to Đà Lạt Center to again wander, ask, and wander and ask some more until I again encountered a woman willing to walk me to a man with a sewing machine, talent, and a sense of humor. I needed someone with talent and a sense of humor because a few sewing machine operators had already told me that what I asked was impossible.

The weekend prior to my departure from the U.S., I met with new friend Mike to ride our Victory motorcycles together to what was supposed to be my first meeting of the Cascade Victory Motorcycle Club. As we rode through the Gray's Harbor County countryside and into a downhill curve, my wheels slide out from under me and I found myself lying on my side with the bike on top of me, pinning down my left leg. Were it not for the gravel underneath me, I'm sure I would have been unable to lift the bike enough to free myself. Needless to say, my new-to-me Victory Kingpin sustained some damage, though if I do the work myself, I'll be able to keep it under $2000.

The reason for mentioning this at further injury to my ego, is that it explains the two holes burnt into the left arm of my armored jacket. Because I was in full armor/helmet/boots, only "things" were permanently damaged. The best part is that I didn't even notice the jacket's burn holes until I was already in Việt Nam! I know I'll buy a new jacket when I return to the US, but for now it would be nice to have one that is intact. After trying a few options in HCMC, I had almost given up. Then the owner of the Hà Vy Hotel (where I stay when I'm in-town) offered to sew a patch on them for me. I ran upstairs and grabbed a Việt Nam flag patch that I'd brought with me, and she sewed it on to cover the larger of the two holes. There was still a smaller hole, so while in Da Lat, I found the previously-mentioned guy at Da Lat Center who charged me 50,000 VND (US$2.50) to repair the two holes and sew the flags of the countries I've ridden a motorcycle in so far (US, Việt Nam, and Cambodia) on the sleeve to both cover the repairs and give me a unique jacket. 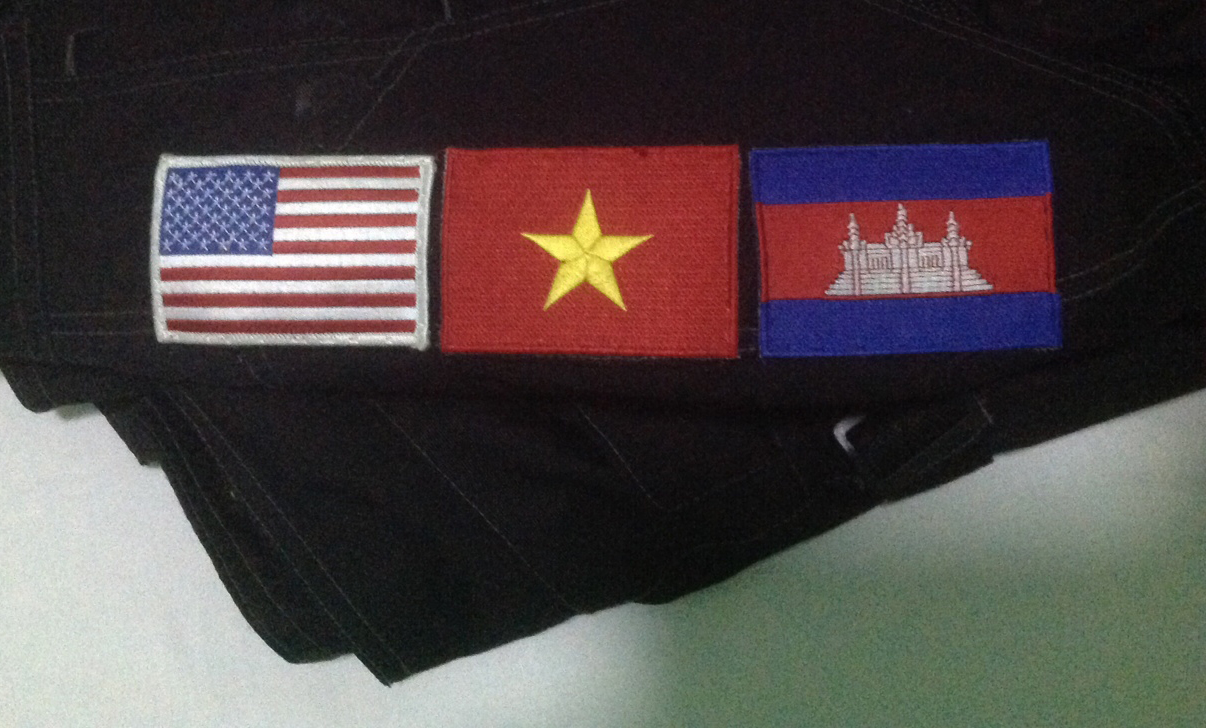 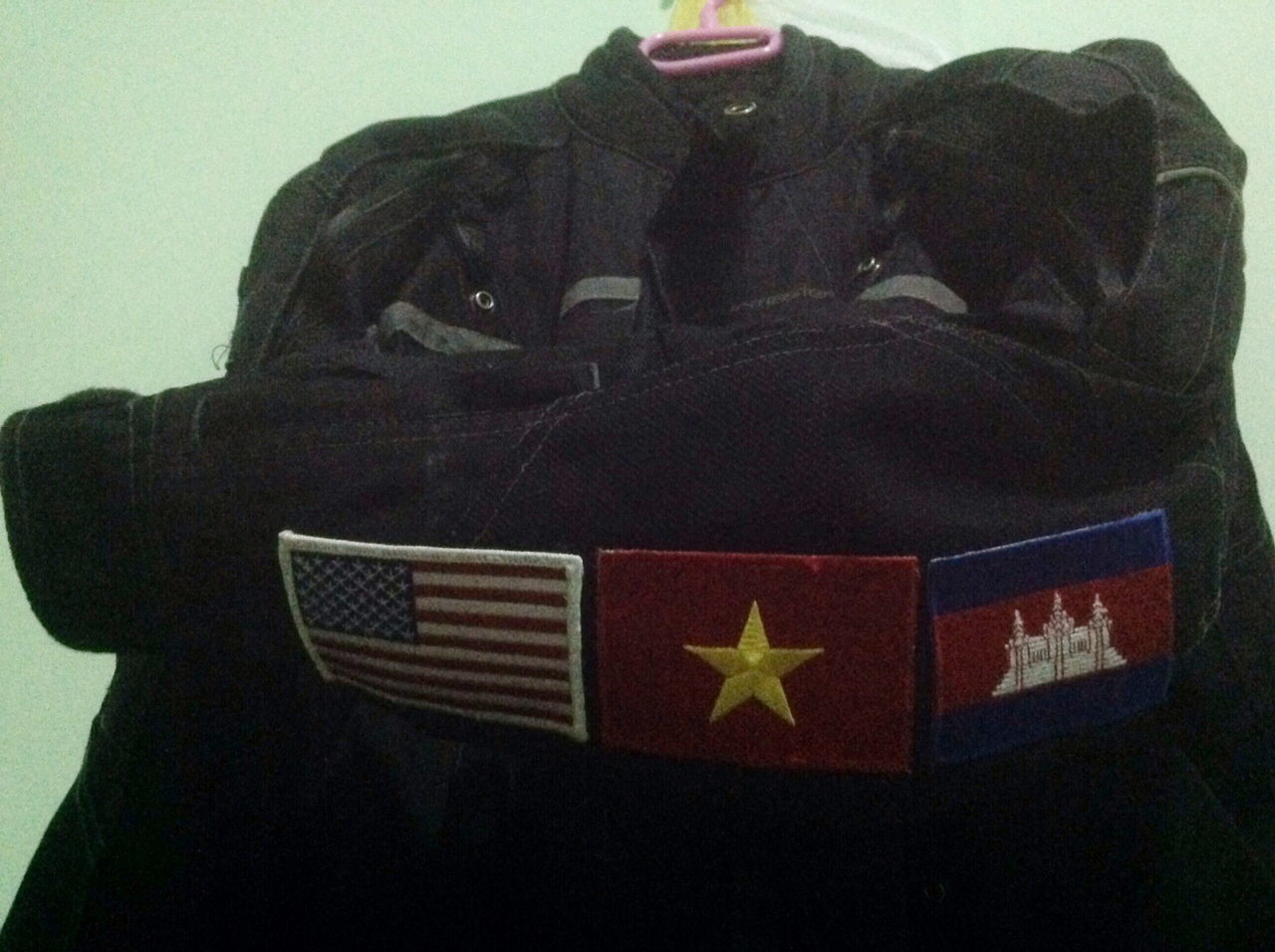