Time to do a bit of catching up... there are so many things to do and see; so many restaurants and cafés to experience; so many people to watch and talk with (though I avoid Westerners as much as I can outside of the occasional endorsement of a restaurant they are considering as I walk by); and so many narrow alleyways to explore...
Tiếng Việt
During my time here, I'm working on learning words and short phrases in Vietnamese (Tiếng Việt). My progress is significantly slower than I'd like, and I certainly could be spending more time on it. I'm committed to learning the language of the country in which I will live. That means it's back to the flawed audio lessons I studied prior to my first visit and, as soon as I get back, taking formal Tiếng Việt lessons.

One of the things that is holding me back is the reaction I get from most native speakers when I try to speak even a few words in their tiếng... a blank stare... though I think I've finally figured out the cause.  When a native-speaker sees my white, Western face, he/she expects that the language coming out of my mouth is English—or at least NOT Tiếng Việt. For example, the Vietnamese word for milk is "sưa", pronounced suu-a with a downward accent on the first syllable and I often order tea with milk at breakfast. The universally available tea here is a yellow-label Lipton (I know), so I used to order trà lipton sữa. Unfortunately, because the hard-g sound is difficult for the Vietnamese-speaker's palate, so their pronunciation of the English word "sugar" is amazingly close to my pronunciation of "sưa".

Guess what I get when I order "trà lipton sữa."

Yup!  Tea with sugar. Since I don't like sugar in my tea or anything (except for the pinch that makes an avocado smoothy VERY good), I now order " trà lipton milk."


Am I over-thinking these things? :-D

RAIN
The main reason I came here now is to check out the rainy season. This was the view from the Terrace Cafe on 24 June:
WOW!

The warning warble you hear in the clip is the noise public buses make when their turn signals are on. Even better, they do actually use them. When you are on a motorbike and hear that sound, you know that the bus is changing lanes and could very well be headed your way. With everything else going on on the street, without that warble you could easily be toast (or maybe a pancake).

Although most of the time it's just humid, there are now rain- and sometimes thunder-showers every afternoon lasting from five to 20 minutes. Then it pretty much clears up... a lot like in South Florida. The storms are usually less intense, though I've seen more than one of these.

I've written before about riding in the cities... imagine riding a motorbike or driving a car in this traffic: 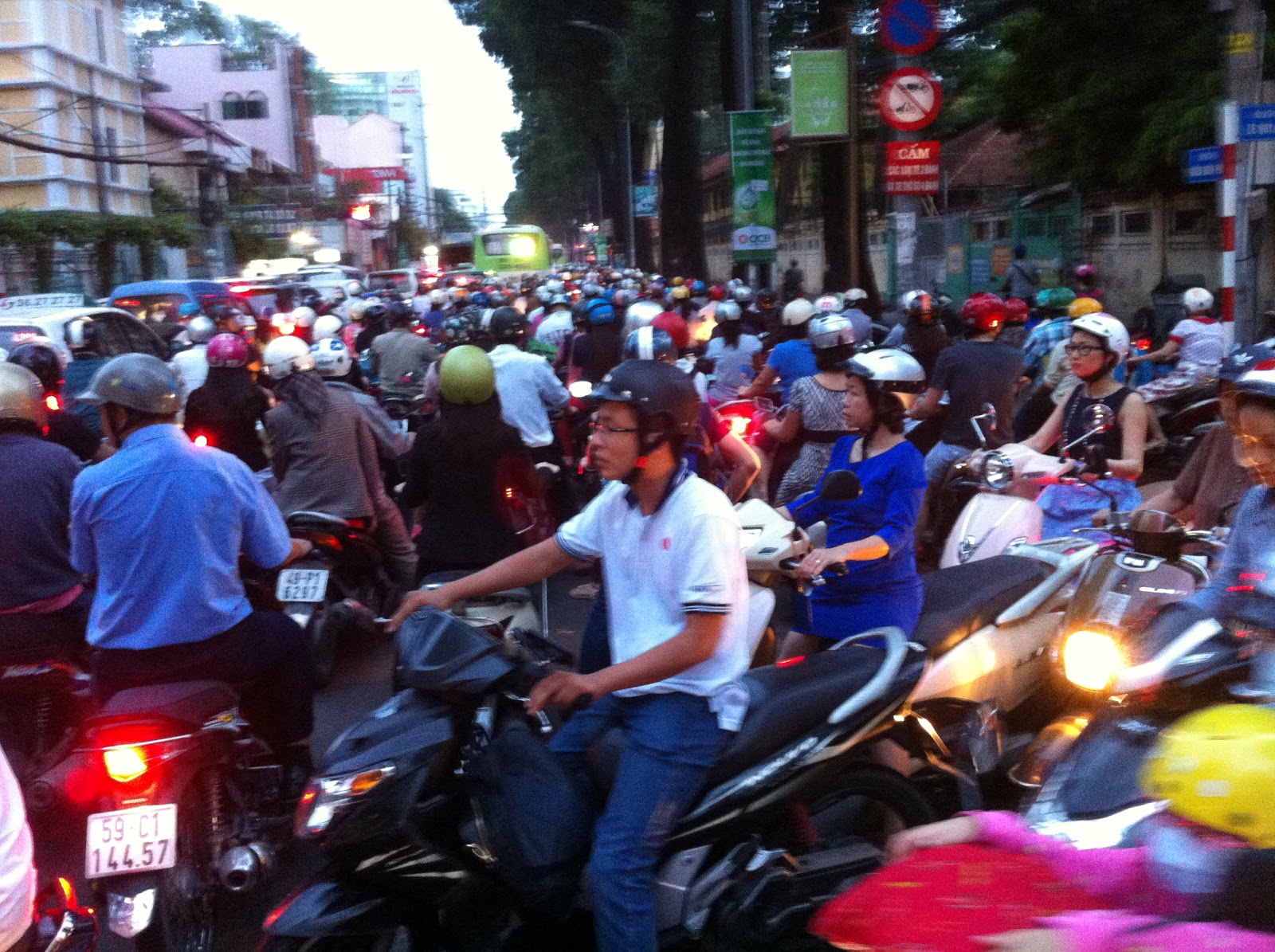 Now add four wheels (cars, trucks, and buses) driving in the middle and third lanes and two wheels (motorbikes) EVERYWHERE... with turns made per these signs: 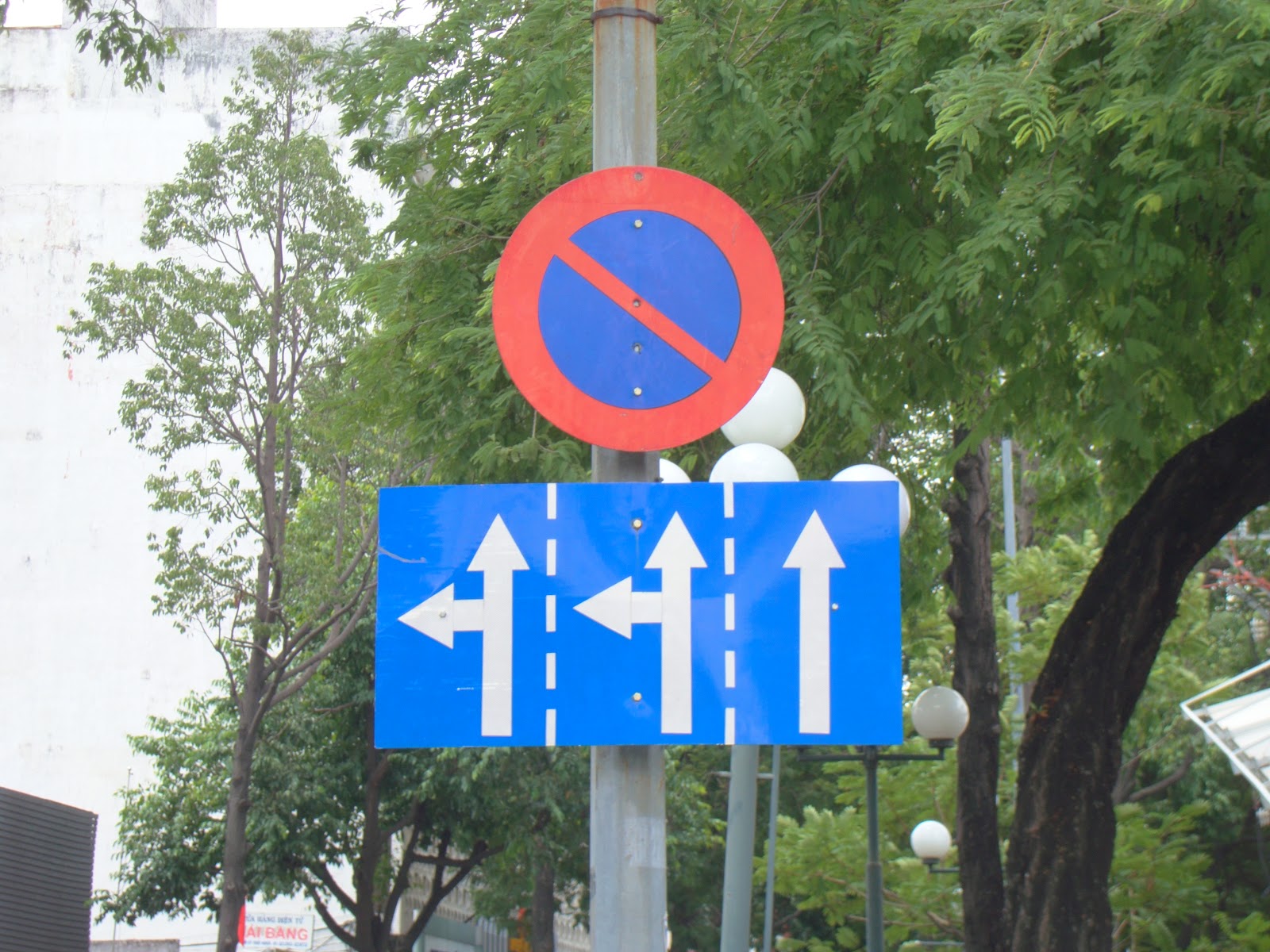 (traffic sign on a one-way street approaching the intersection of another one-way street)
Yes, that's right! Here vehicles turn left from the left lane (and sometimes the middle and right lanes) and all vehicles, both two and four wheels, turn left from the middle lane... while other vehicles are going straight through from the left lane. When turning assume there is always someone between you and the curb; because there often is.  A few nights ago, sitting almost next to the curb at a street restaurant, we saw a taxi passenger open her curbside door and take out a guy on a motorbike--just like the Three Stooges, except that it was real. The guy was a bit miffed, maybe because his head missed a light pole my centimeters; the passenger was a bit embarrassed; the taxi driver was upset; and the diners sitting within spitting distance looked up at the THUNK and then continued their meals and conversations. No one got up to see if the man was okay; no one that I saw took a photo--the one to have, of course, was already history; and no one seemed to give it much thought.  Since it wasn't the first time I've seen something similar and I was again the only Westerner I saw in the area, I'm thinking it was, to them, a non-event. Even the guy on/off the motorbike climbed back on and rode away within two minutes.

The lesson: NEVER ride a motorbike between a stopped four-wheel vehicle and the curb. And yes, it has to be said...

A day after I wrote that long description of turning I saw turn markings on the street that were significantly intriguing that I did a 360 (you do NOT want to know) and backtracked to take a photo of the sign on a pole: 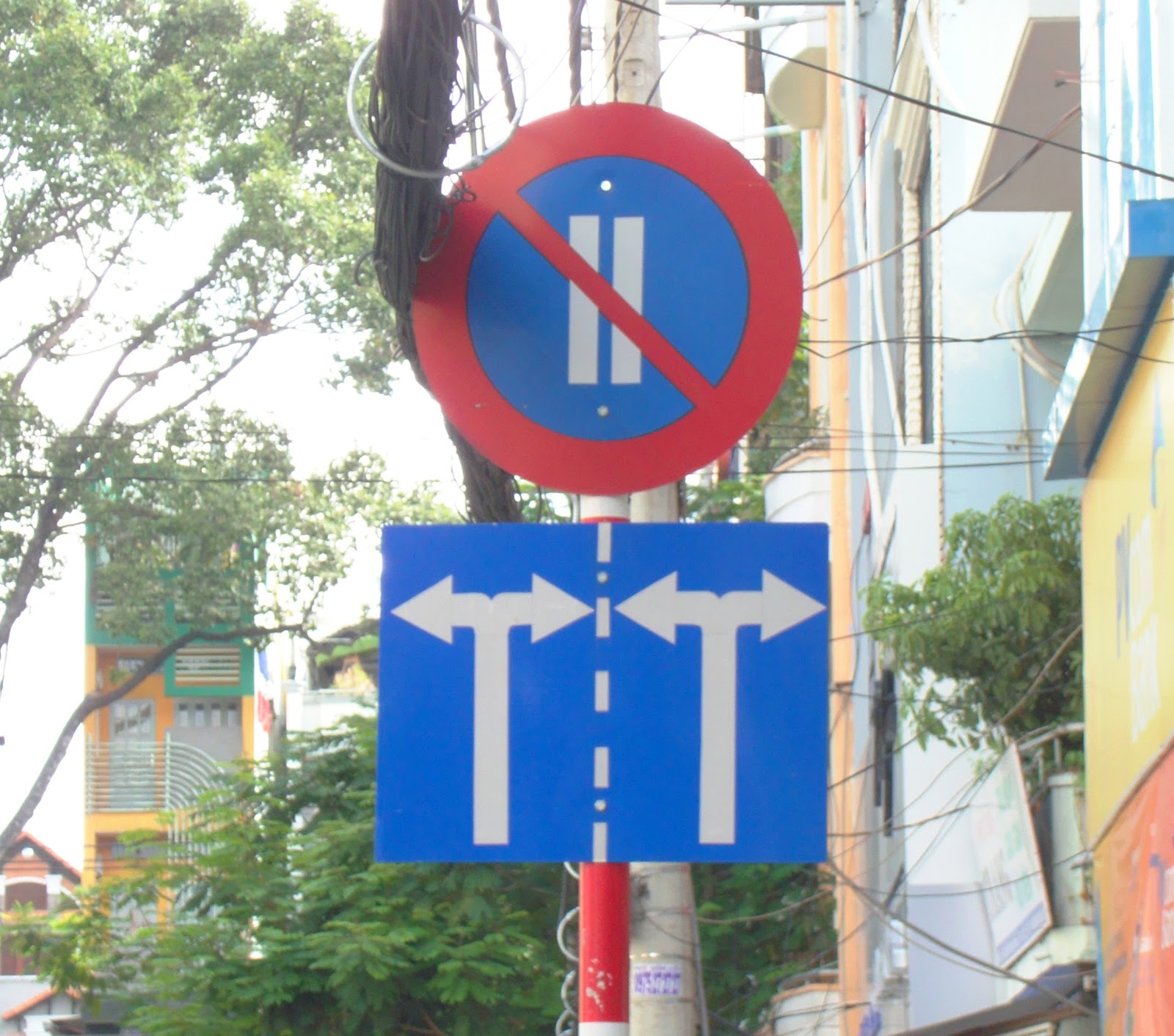 Yes again! You can turn left or right from either lane... and, amazingly enough, it usually works!

Table Napkins
When you dine at one of the street restaurants and many of the sit-down cafés, you will find that the napkins look a LOT like toilet paper because they are. There are plastic containers designed for holding a roll with the open end of the tube (if there were one, which there isn't) facing up. They work just fine... 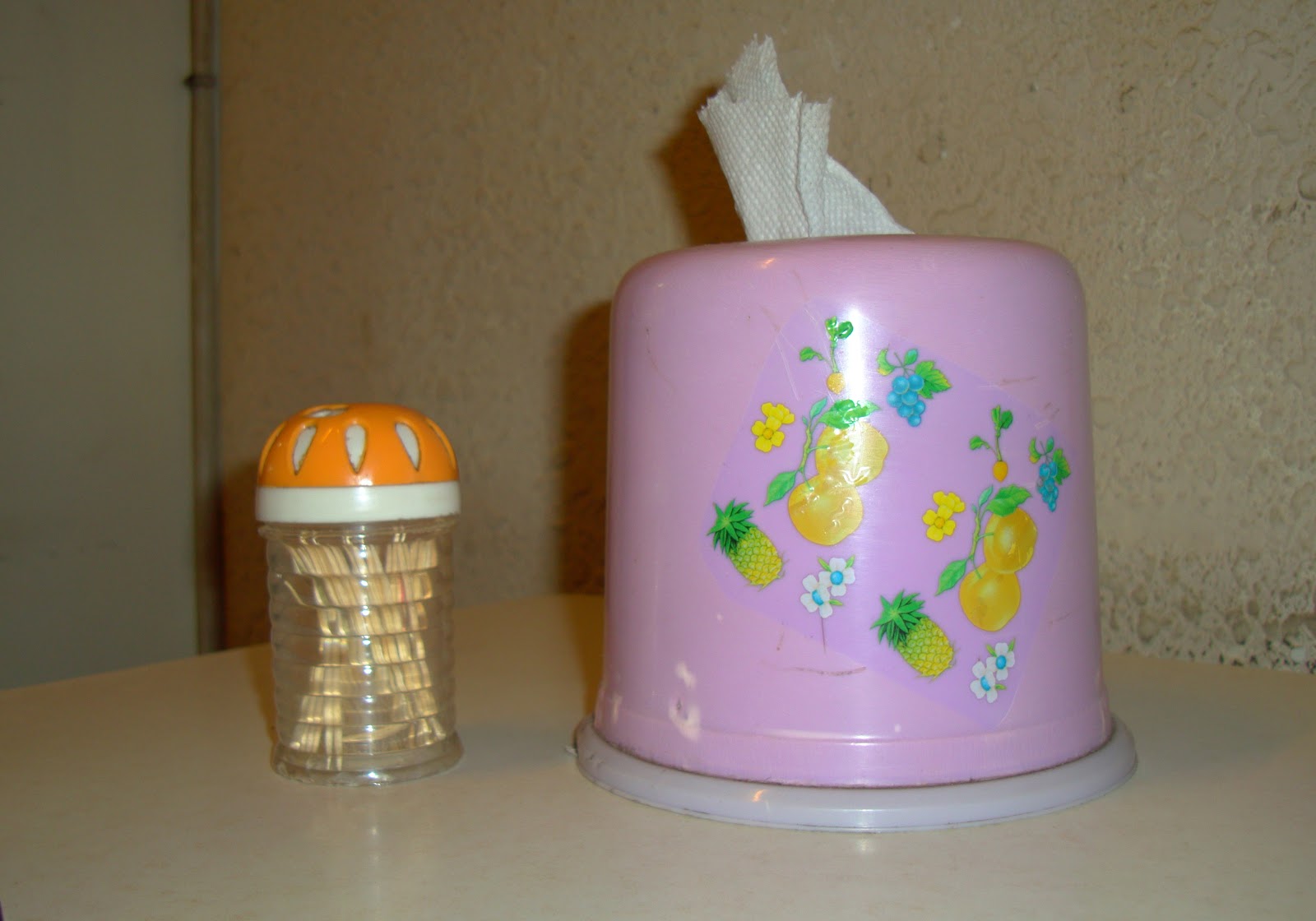 The container on the left is the omnipresent toothpick dispenser.


Herbal Sleep Aid
Many years ago I joined the group of humans for which pulling an all-nighter means not getting up at least once to pee. In recent years, I started waking up at 3 or 4 a.m. with little to no chance of getting back to sleep. The only thing I've found that works in keeping me down all night is Ambien CR; it has some pretty negative side effects and my doctor is pushing back pretty hard on my request for it.

A couple weeks ago I stopped at the pharmacy across the street from my hotel and asked the pharmacist what she recommends. She gave (sold) me a 60mg herbal called rotundin that costs 120,000 VND (US$6) for 100 tablets... and it works quite well if I take one or two in the middle of the night. I'm bringing 200 tablets home to get me through my remaining time in the U.S.

I mention it here because I know that a number of you reading this have the same challenge and have yet to find a solution.

Tokyo Deli Sushi—various locations; very good sushi for two for under US$25.

View Café, 2A Troung Quoc Dung Street, Phu Nhuan District (near the airport)—I wandered about 100 meters down a side street and happened on this restaurant/café.  After leaving the motorbike with security, I walked up a flight of stairs to two tables on a terrace... and an elevator with only two buttons floors; the one I was on and "9". 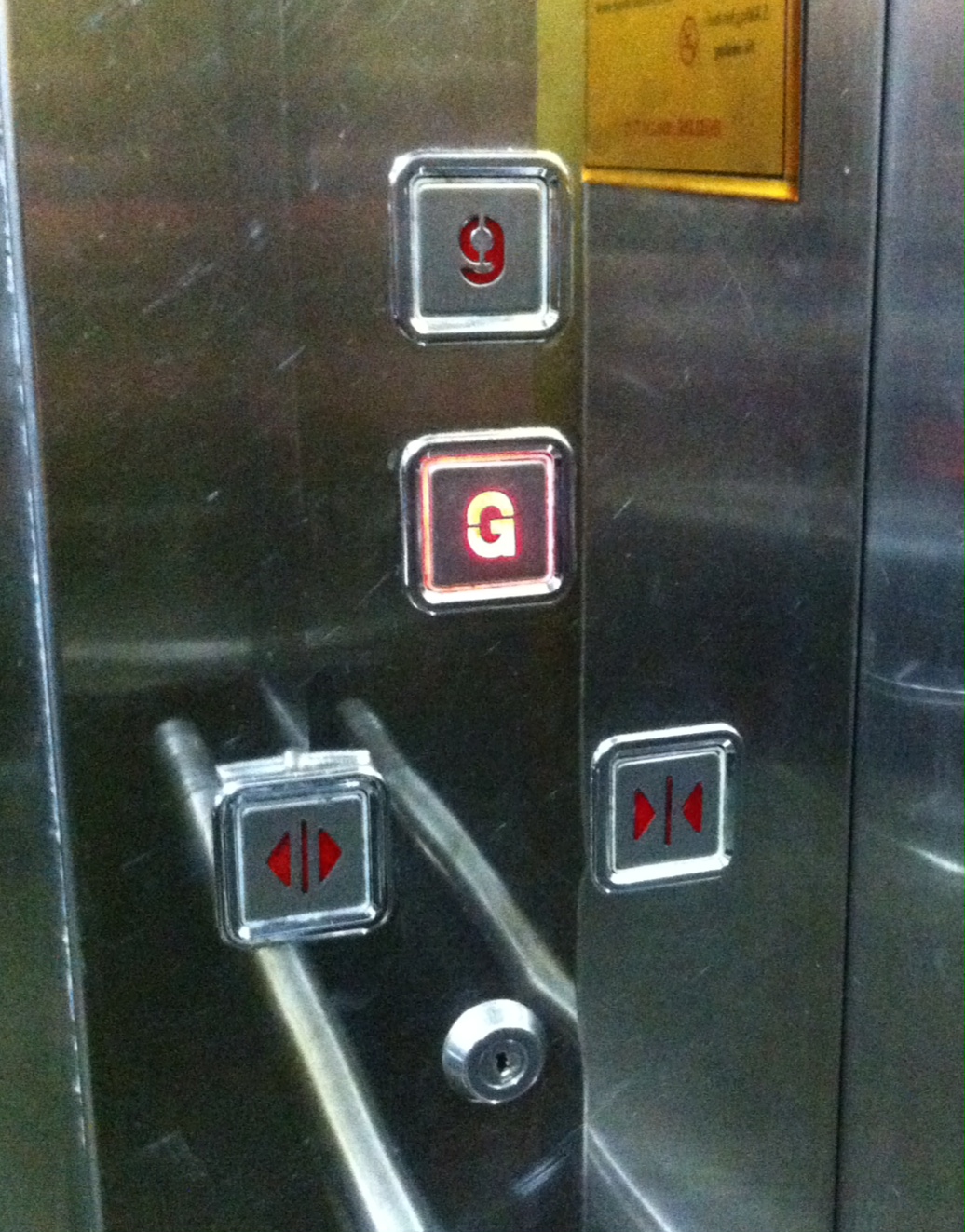 The ninth and top floor is another indoor/outdoor venue with a panoramic view of Sài Gòn. 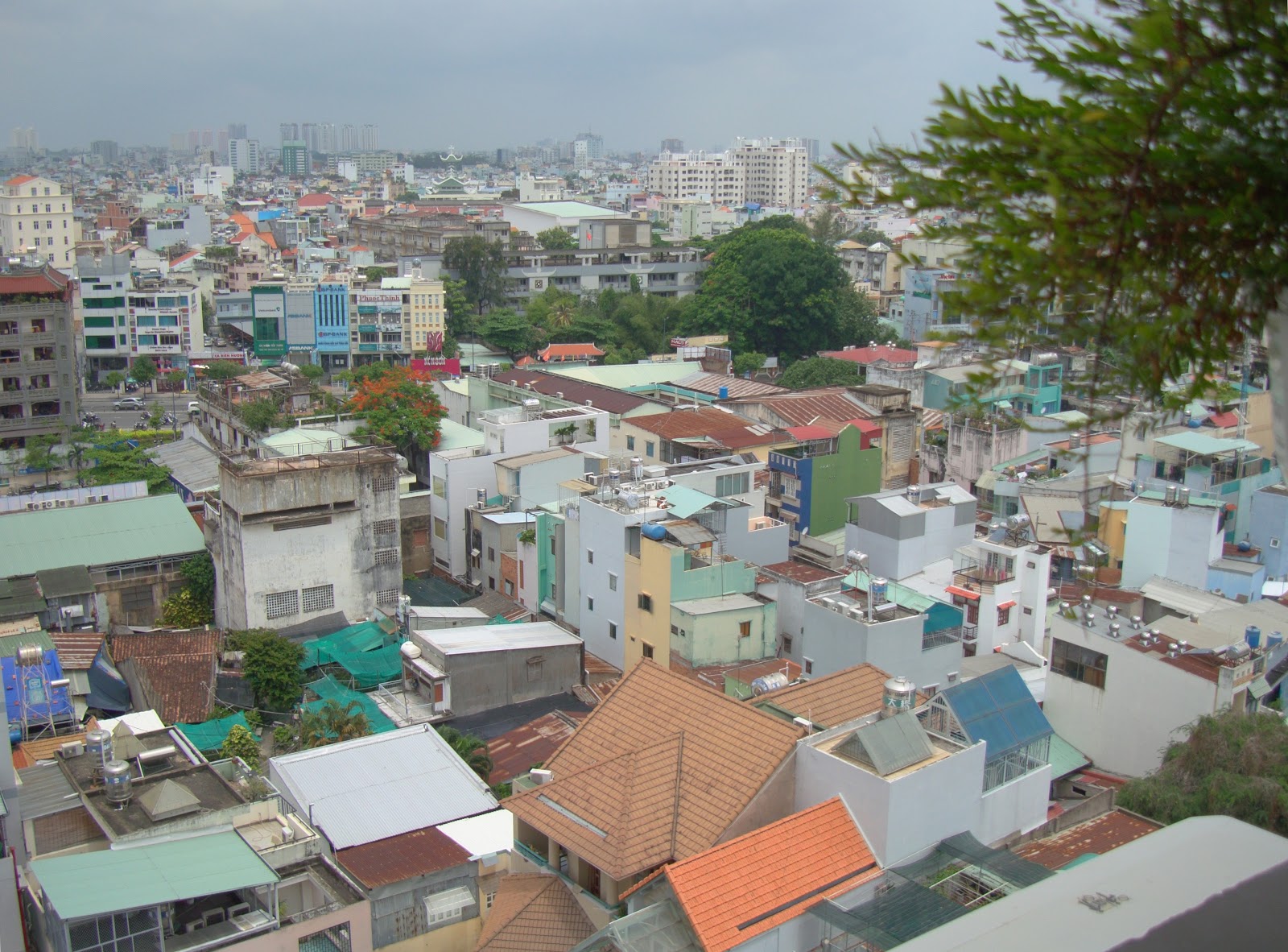 What a find! I called my friend to rave about it and found that its existence was even a surprise to someone who lives a few blocks away.

Lang Van Café, 182/1Nguyễn Trọng Tuyển Street, Phu Nhuan District—this is where I met the above-mentioned friend for coffee and it's a couple blocks from the View Café. Another café with the wonderful sounds of waterfalls and a choice of inside or outside seating. There is also an upstairs terrace that I plan to explore on my next visit.

Railroad Crossings
During my HCMC to Ha Noi adventure, I may'be mentioned that the railroad crossings in the countryside consist of a manually-operated gate that is literally pulled across the road by a person who either arrives before the train or is stationed there all day. I did not stay around long enough to research which it is.

I was very surprised to see that it is the same in Ho Chi Minh City, population 7-point-something million: 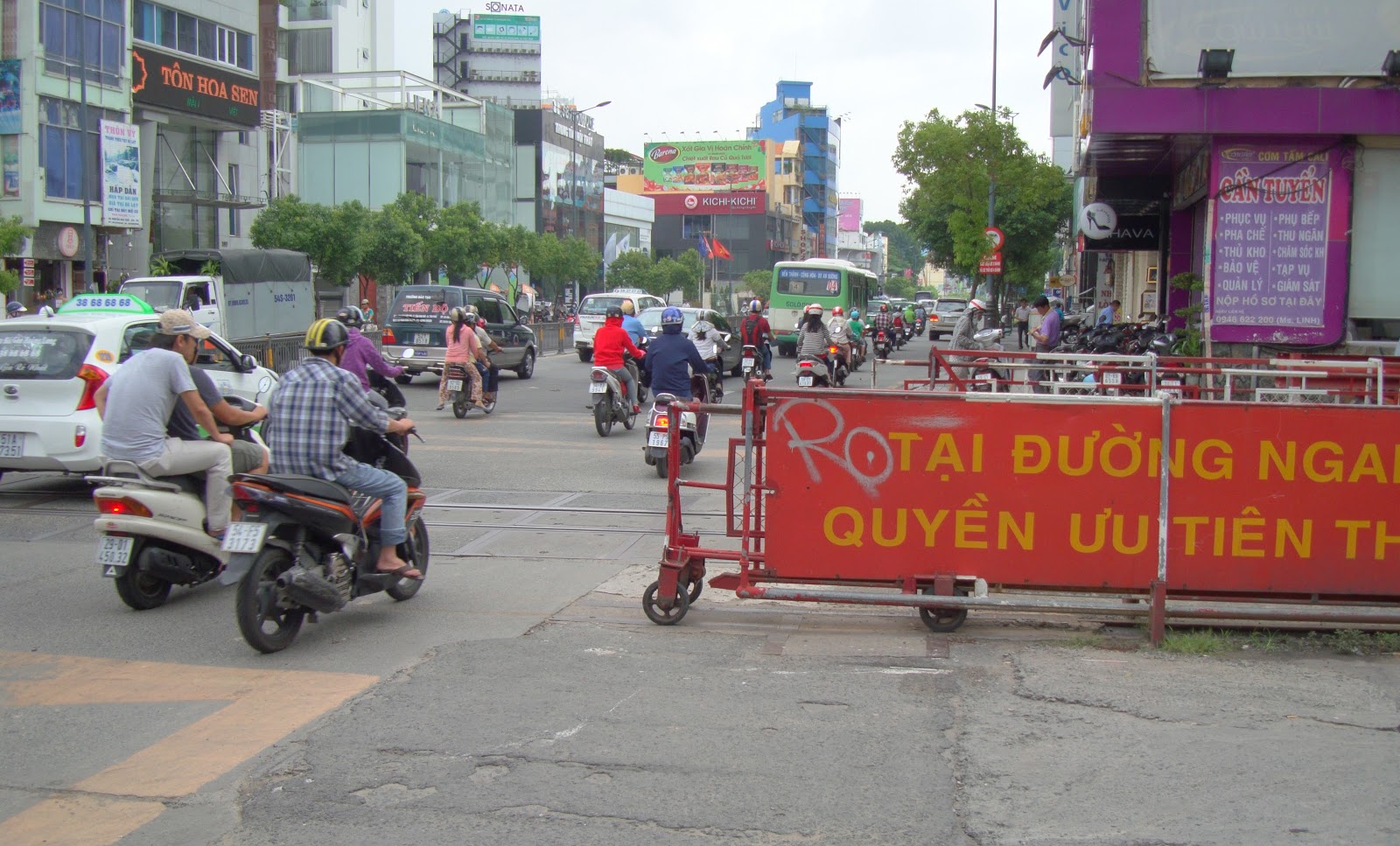 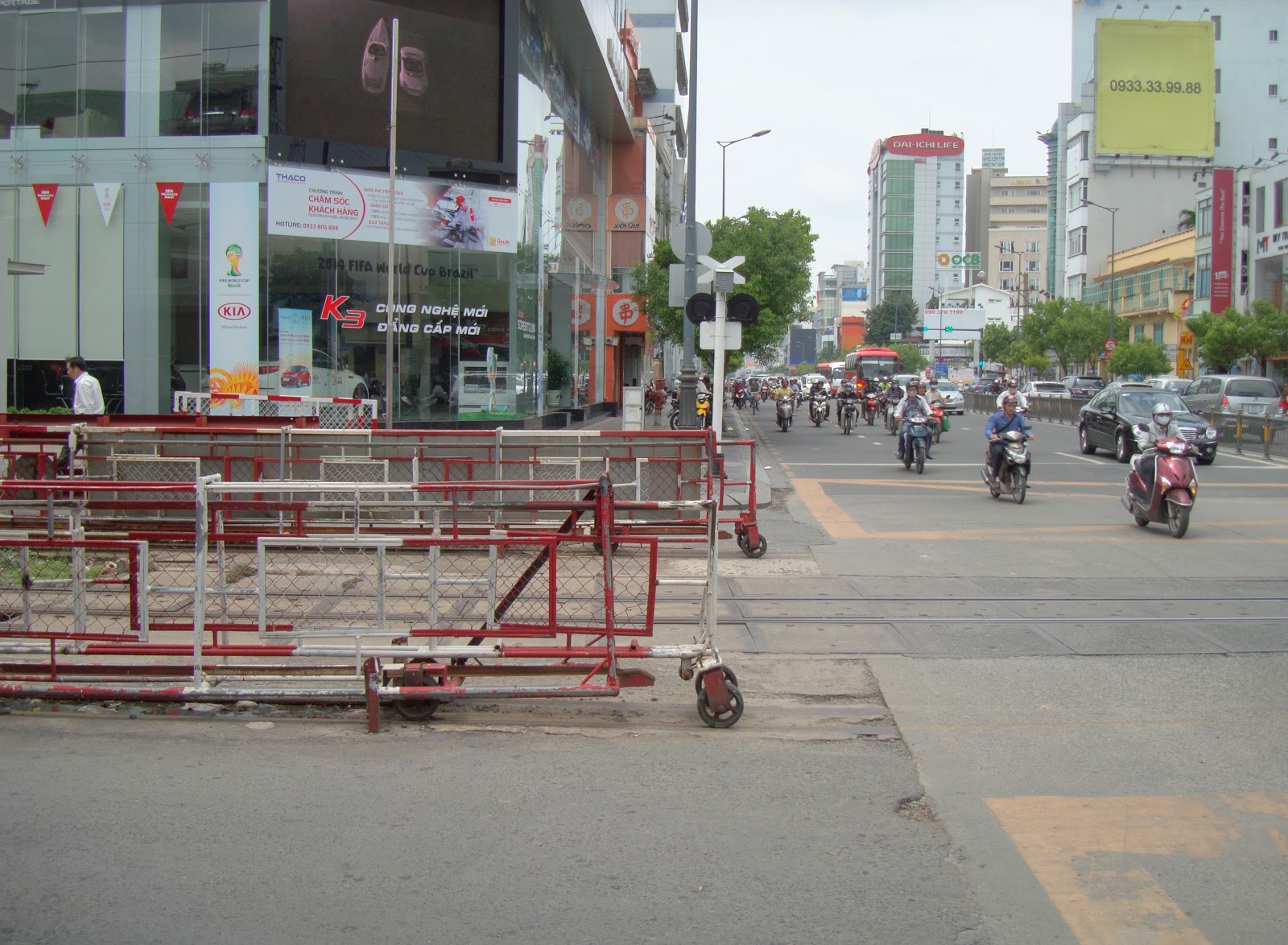 Oases
There are many places in HCMC to get away from the noisy city. One such oasis is on Trường Sa Street, just meters from one of the major thoroughfares: 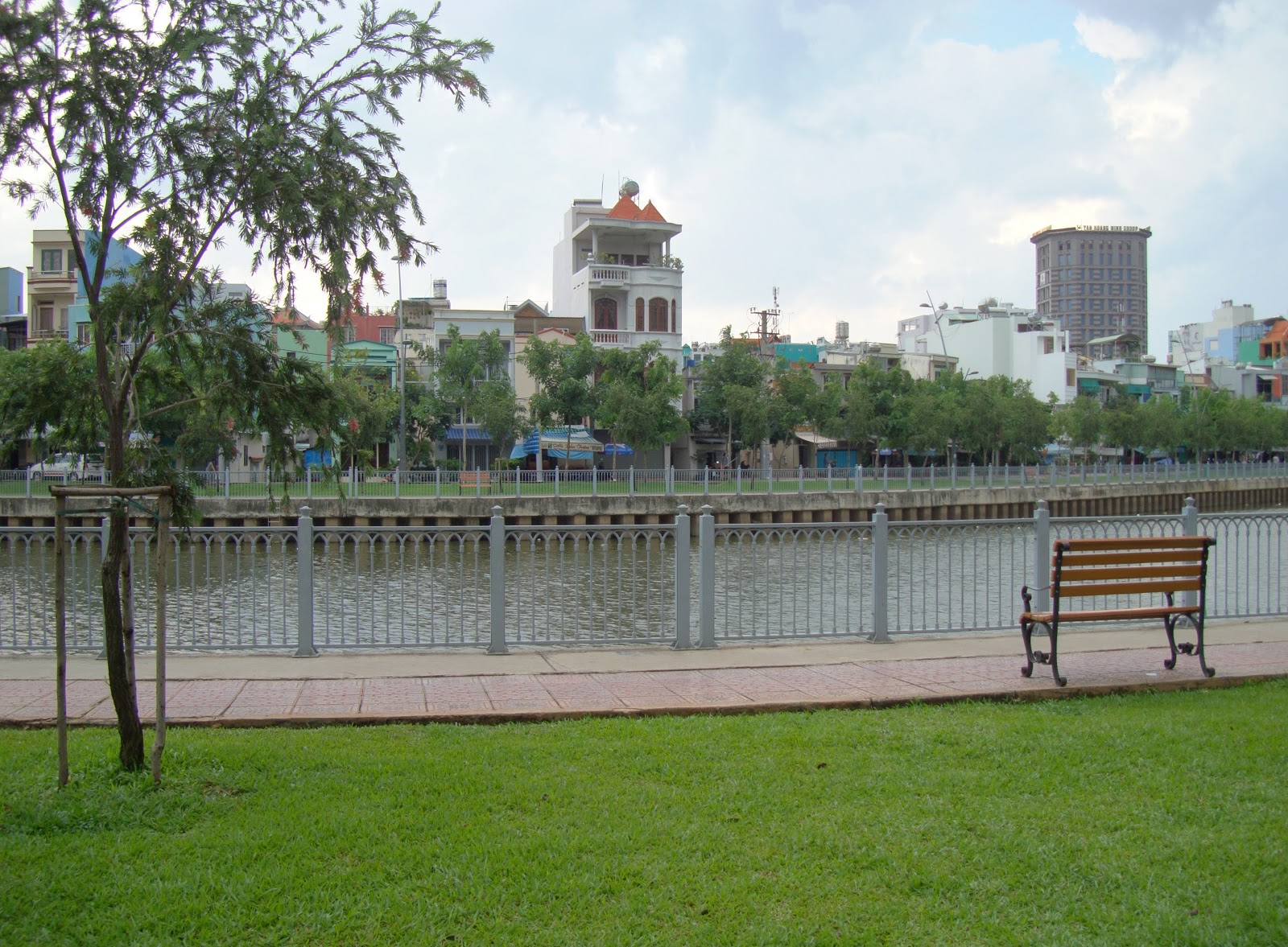 Until next time (did you notice that I've stopped promising Mr. Rot's Secret Tour is next? I do promise that I will get to it ;)...